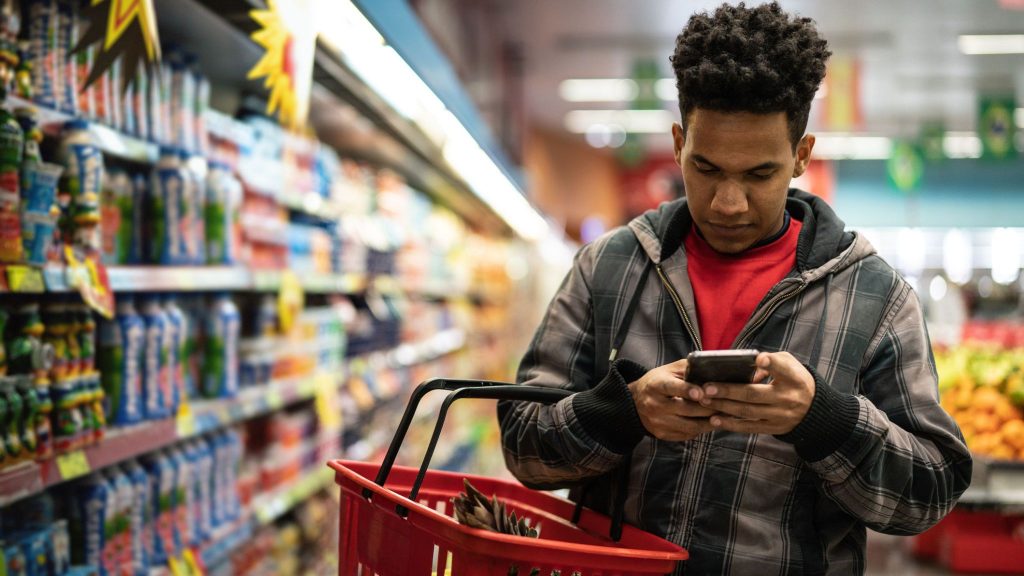 As supermarkets have developed over the years, they now present a one-stop shop for almost every product a consumer could wish to buy. Apart from food and drink, they offer clothing ranges, electrical and electronic goods, entertainment, even franchises for opticians and after-school tutoring for children. Two of the largest, Tesco and Asda, not content with just selling mobile phones, have gone a step further and now run their own mobile virtual network operator (MVNO) brands, selling airtime packages along with handsets in store and online.

Until now, supermarkets have limited their involvement with mobile devices to selling new phones with or without airtime deals. But that could be about to change. Evidence is growing that a seismic shift is occurring in the new and used phone market. Marketing methods are moving away from reliance on heavily-promoted launches of new models to sustain demand for new smartphones. Sales of new handsets are falling while sales of used or pre-owned devices － already worth $20bn － are increasing by almost 10% each year. As consumers, we are rejecting a throw-away culture in favour of recycling.

Due to a perceived lack of value in or demand for used mobiles, buying and selling mobile phones used to be a very low-key, informal affair, taking place on a few online marketplace sites, light years away from the heavy marketing of the tech giants and the corporate world of new consumer gadgets. But now that the pre-owned market is booming, large retailers are beginning to take an interest in stocking used phones, which would signal that the second-hand mobile market has graduated from its hitherto amateur status.

Whether supermarkets will sell used smartphones will depend on three critical factors: consumer demand; what the competition is doing; and the supply chain. Of the first, the huge surge in sales of pre-owned handsets is testament to the fact that consumers are increasingly turning to the second-hand market. It really is a no-brainer. Why spend hundreds of pounds on a new handset which is only marginally better than your current device? And what could be better for the environment than recycling old phones, and all tech, for that matter, and receiving a payment for doing so?

In any case, the second-hand market affords you, the consumer, a great deal of choice and flexibility. You can choose precisely the phone you want in terms of make, model, quality and price, easily and quickly by shopping online. And forget the hassle of being contracted to one supplier for 18 or 24 months. Shop around for the best deal from one of the MVNO brands and you’ll be in complete control of your mobile and your finances. You can then upgrade whenever you want to and continue to shop around for the best airtime deal.

With regard to the competition, the main supermarkets follow events in online retail very closely and are as aware of the latest trends as they are of threats from within the grocery trade such as the incursion of the continental discounters. The major players will, no doubt, be fully aware of Amazon having positioned itself already as a significant retailer of used smartphones.

As to the supply chain, what is of utmost importance to the main supermarkets to trade effectively is reliability and scale. Once they choose to stock a product, they need availability in bulk and widespread distribution across a great many stores. Previously, there might have been the belief that the used phone market offered irregular and unreliable supply systems and lacked a structured and professional wholesale sector.

However, with the rise in companies such as sell.ineedamobile.com, which operates one of the largest pre-owned mobile wholesale and distribution networks in Europe, sufficient infrastructure exists to satisfy the needs of the largest retailers. Used mobiles of all the main models can now be sourced, tested, graded, reconditioned and distributed in the quantities required by supermarkets. It would be surprising not to see pre-owned smartphones in supermarkets in due course.

Sell.ineedamobile.com buys not only phones and tablets but also Macbooks, smartwatches, laptops, games and game consoles. Established in 2010, the company has since bought millions of pounds worth of devices. Their prices are said to be among the most competitive in the mobile recycling market and they guarantee that you will receive the best value for your old device. Their process is easy and simple to use. Use the search tool on the website to check how much your gadget is worth and then create an order. Once the company receives your device, they will check it and pay you via an instant bank transfer the same day.